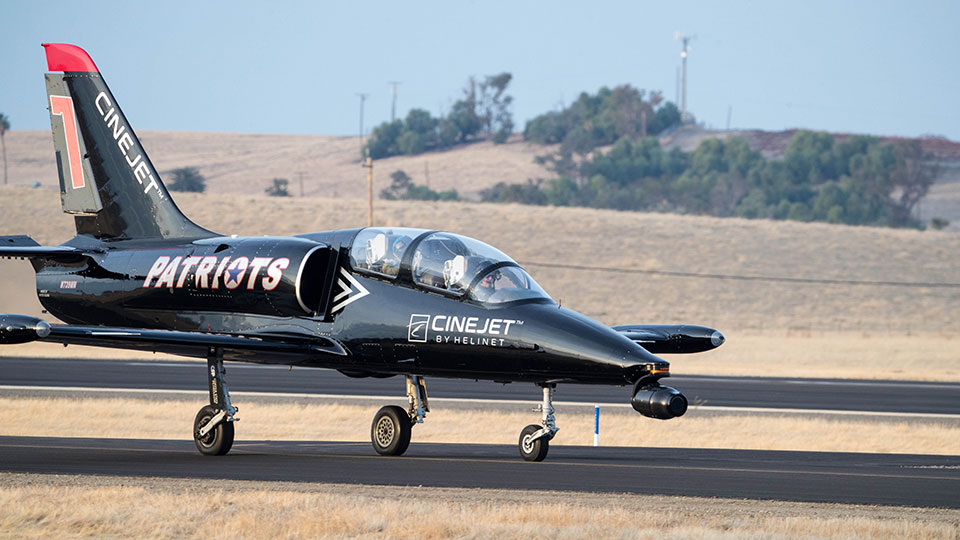 The SHOTOVER F1 used by Helinet on CineJet™, is specifically tailored for the unique capabilities of the jet platform, providing incredible dynamic range and unsurpassed 8K image quality at elevated speeds exceeding 350 knots and during maneuvers approaching 3G’s. The open platform design of the F1 system allows for future resolution growth and a comprehensive range of professional camera and lens combinations depending on the needs of each client, and as new technology comes to market.  Further increasing the functionality and capabilities of CineJet™ is a specially developed multiple antenna array, installed by RF Film Inc., to deliver high definition video, GPS data, and ground-to-air audio communication.

The aircraft will be flown by Helinet’s VP of Aerial Film Production, Kevin LaRosa II and Patriots Jet Team Founder, Randy Howell. For over 16 years Kevin has served the film industry’s top productions as a stunt pilot and aerial coordinator, and is a member of SAG and the Motion Picture Pilots Association. Randy has accumulated more than 23,000 hours of flight time and has over 30 years of flying experience with United Airlines. He has been an advanced instructor in aerobatics, formation, UPRT as well as a Check Airman and Simulator Instructor in a multitude of aircraft.

At its NBAA launch, Helinet will feature some of the remarkable imagery made accessible by the high-speed CineJet™ platform. The video, edited and produced by industry partner 3DF, showcases the exciting and unmatched capabilities of CineJet™.

About Helinet Aviation: Helinet Aviation Services is a diversified helicopter transportation provider located in Van Nuys, California. With over 30 years in business, the company has earned a highly trusted and widely respected reputation for its exceptional pilots, unparalleled service, and an outstanding safety record. Helinet serves the following markets: VIP charter, emergency medical services including patient and organ transport, electronic news gathering, motion picture, television and commercial production, and airborne law enforcement. Its mission is, and has always been, to be Southern California’s preferred carrier for safe, responsive and reliable rotor wing services. For more information: http://www.helinet.com

About Patriots Jet Team: The Patriots Jet Team is the only six-jet precision aerobatic demonstration team in North America.  Based in the San Francisco Bay Area, the Patriots are the civilian version of the U.S. Air Force Thunderbirds, U.S. Navy Blue Angels, and Canadian Snowbirds. Featuring world-class pilots who have flown for all of these military demonstration teams.  For the past ten years, the Patriots have performed in their sleek, jet-black L-39 aircraft at numerous air shows and special events, principally in the U.S. western states.  The Patriots' goal has been to entertain millions while inspiring and educating our nation’s youth about aviation. The Patriots Jet Team now offers Upset Prevention and Recovery Training.  The program can best prepare pilot groups with the most realistic training in the world using a fully aerobatic Corporate Sabreliner Jet. Patriots is online at http://www.patriotsjetteam.com

About SHOTOVER:  SHOTOVER is a developer of high-performance camera systems and UAVs for the motion picture and broadcast industries. The company’s line of gyro-stabilized camera platforms offers aerial cinematographers an unprecedented level of stability, control and versatility in a compact package easily configured for 2D, 3D and Ultra HD shooting with the world’s most advanced cameras and lenses. Developed in partnership with the motion picture industry’s top aerial cinematographers, SHOTOVER systems are fully user upgradeable, allowing operators to utilize new professional cameras, lenses, and accessories as they come to market. SHOTOVER is online at http://www.shotover.com