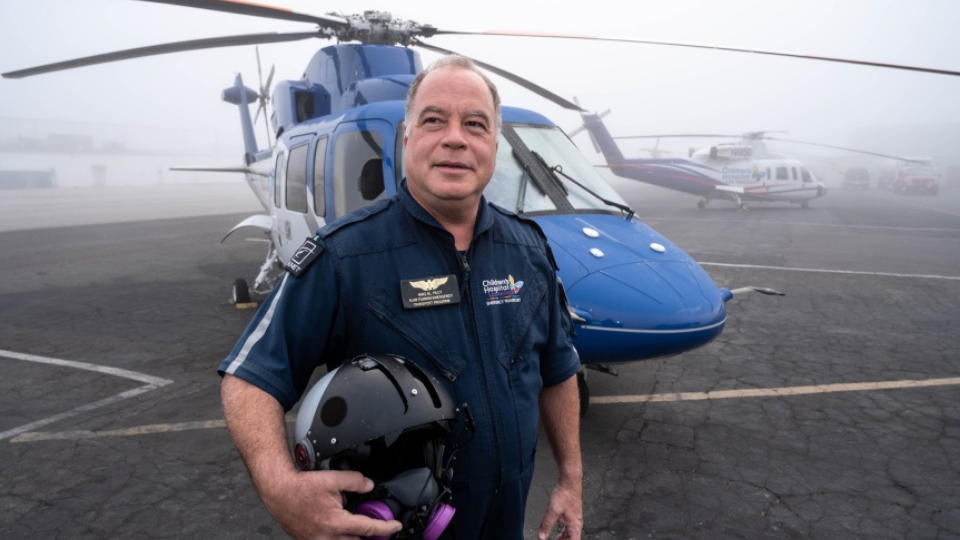 ‘They Really Save Lives’: The Drama, Risks and Rewards of Helicopters to be Showcased

Brice Stella, a deputy sheriff and a paramedic with the Los Angeles County Sheriff Department’s Air Rescue 5 team, has been jumping out of helicopters for the 10 years, saving this person or that one.

Downed motorcycles, cars over the side of cliffs, fallen hikers, heart attacks, diabetic emergencies, people in the mountains expecting a good day sometimes have a little bad luck, he said. He’s got a less-stressful operation coming up, an appearance at the American Heroes Air Show at the Hansen Dam Recreation & Sports Complex in Lake View Terrace.

His earliest memorable save was in the Angeles National Forest where the unit is based.

A young man from New Zealand crashed his motorcycle on Angeles Forest Highway. When Stella and his team arrived at the scene, one of the man’s legs was completely severed and the other barely attached.

Within 14 minutes of hearing the call, the air rescue team had him to the hospital. Ten years later he is back in his home country working as an arborist and driving a little sports car with a clutch.

“He gets around like nobody’s business in it,” said Stella, 53 of Huntington Beach.

Air rescue units include a pilot, a co-pilot and three paramedics.

Just in January, 2020, the team did just that in another memorable save in Stella’s career.

They were headed to a hospital with two non-critical patients when they heard a radio call about a cliffhanger in the mountains above Altadena in the Eaton Canyon area.

Stella and his team checked it out because they were close.

When they turned the corner there was a woman hanging from the bushes and appeared as if she was going to let go at any time.

Stella was lowered down in a tricky spot under some wires with a rescue harness or loop that goes around another person.

The pilot had to be on his game. The crew chief who operates the hoist and the cable is the eyes of the pilot who can’t see what is going on; the pilot simply has to listen to the crew chief.

“So, I was lowered down, got into a position underneath her, and the rotor wash is really strong under the helicopter, and right at the point where the crew chief was starting to lift me up so I could get up to her and get her into a horse collar, she either fell, let go, she didn’t remember at the time and I just saw her fall about 10 feet,” Stella said. “I just caught her and wrapped my legs around her. So now, we are probably about 100 feet above the canyon floor just hanging onto the woman and my crew chief is able to lift us up about 50 feet and get us up on the trail and set us down on the trail where I unhooked the harness and she was safe. A news helicopter captured the rescue, which is unusual because 99 percent of the stuff we do no one hears about.”

Along with the sheriff’s air rescue helicopter at the American Heroes Air Show at the Hansen Dam Recreation & Sports Complex in Lake View Terrace, other rotary wings will be on display and crews from 20 different agencies, such as law enforcement, fire, emergency management services, United States Department of Homeland Security and military branches will provide information on career opportunities.

A naturalization ceremony is also scheduled for 10 a.m. and there will be an unveiling of the Bell 47 helicopter restored by the Los Angeles Fire Department Museum.

Jim Paules, the founder and volunteer producer of the event that initially drew 200 visitors at Santa Monica Airport in 1993, attracted between 4,000 or 5,000 annually before the pandemic shut it down last year.

“I’m excited to be back, involved with public safety and the helicopter industry for law enforcement,” said Paules during a recent phone call from his part-time home in Georgia. “We have a number of EMS and military Blackhawk types and the USAF has their 66 rescue search and rescue team based at Nellis Air Force base in Las Vegas coming. These guys are top in search and rescue and recovery. They will be there, but are always on call, on active standby.”

Since Paules, a financial executive with a Calabasas homebuilding company and part-time West Hills resident, started the show, people from all around the country have attended because of their love of helicopters and technology. Consequently, they started similar shows in Austin, St. Louis, Seattle, Phoenix and Tampa.

“It’s astonishing to me the enthusiastic people I have met want to take it back to their hometown and get more involved with it,” said Paules whose father was in aviation and who has relatives in law enforcement. “I never intended this would become a national event. I love the connectivity with technology and public service, saving lives. Over the years I learned how that technology has grown outside of law enforcement and military and especially in California rotary wing aviation, which is the first tool out of the toolbox to fight wildfires. We see the technology has become more applicable and more valuable and when people come to the American Heroes Air Show they will be able to see that technology and talk to crews.”

One of those crew members could be Michael John Monaghan, a contract pilot since 2005 with Van Nuys Airport-based Helinet Aviation Services, a partner with law enforcement agencies, film studios and news agencies, who flies a Sikorsky S-76, one of the faster helicopters.

But, Monaghan’s role is dedicated to flying young patients from numerous hospitals as far away as Fresno, Las Vegas and San Diego to Children’s Hospital LA for specialized treatment and care at no cost to the hospitals 365 days a year, 24/7. Since 1998, teams have shuttled 10,000 children. He’s transported 1,100 of them.

Pilots are trained to fly through clouds and inclement weather, which can be challenging.

“Safety (comes) first,” Monaghan said. “Sometimes the hardest decision to make is when the weather is right, at the point when you can fly and you can’t fly, and you have to choose not to go because you know there is a patient at the other end but the weather doesn’t dictate being able to go,” Monaghan said. “You have to stay very objective and then you have to draw on a wealth of experience, knowledge of aerospace, knowledge of the aircraft, knowledge of the mission, where hospitals are, etc. Our pilots tend to grow up through the company where they learn air space when they are flying news and they get familiar with everything and have everything memorized, the frequencies and then start doing organ transports and fly hospital to hospital. A lot of it is experience and knowledge of the area and drawing on that experience to handle the unknown factors that might come up during the flight.”

Monaghan was part of the team that evacuated children from West Hills Hospital and Medical Center during the 2018 Woolsey fire, but he pondered the coronavirus pandemic in the early months the uncertainty about how it was transmitted.

“We didn’t really know in the beginning what we were exactly dealing with,” he said. “It was a virus, but we didn’t know all the nuances. We were out there on the front lines flying kids who were sick and the teams were quite impressive in how they were able to deal with the kids in close quarters in the cabin of the helicopters and then the hospitals. To me that’s very memorable.” And as much as they prepared the cabin, Monaghan still contracted a mild case of the virus. “We are vaccinated (now) … but it was a tumultuous couple of years for us,” he said. “Operations were redesigned because of COVID, with more ventilation beyond the standard requirements to provide additional protection. We are out there dealing with COVID patients and the stress of COVID and the exposure risk.”

ADMISSION AND PARKING: Free; A free shuttle is available from the Discovery Cube Los Angeles area